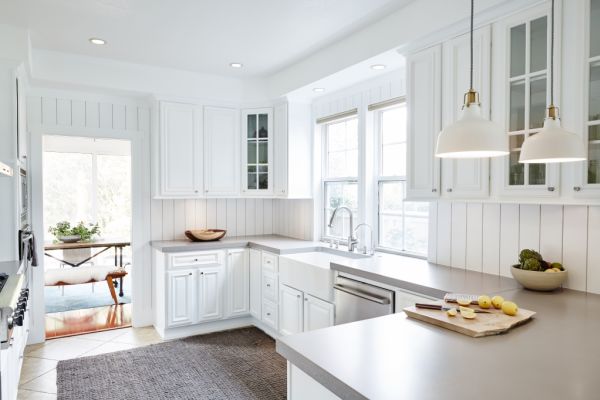 A modern kitchen is a top priority for many home-owners. If your kitchen is feeling dated after lockdown, a refresh might be in order, but the pain of a full-blown reno can quickly put off anyone. Avoid weeks eating microwave food and relying on a portable cooler by easily updating some key features instead.

By focusing on the latest technology, timeless style and functionality, a kitchen revamp can be easier than you think.

Simply replacing your existing appliances will dramatically modernise your kitchen.

“If you update your appliances, the whole kitchen feels updated, especially if you have a vintage inbuilt microwave and a 1980s fridge,” says principal stylist Justine Wilson, of Vault Interiors.

Even rangehoods have undergone technological advances.

“We have what we call a vented cooktop. It’s a two-in-one appliance, an induction cooktop and rangehood in one,” says Emma Rice, NEFF brand manager.

Powerful ventilation built into the centre of the cooktop pulls down the steam and odours and adjusts the ventilation power level automatically. This removes the need for an overhead rangehood, so you’re no longer limited to facing a wall while cooking. The cooktop can be placed in the centre of an island bench for a more communal and modern cooking experience.

You may have the most luxurious kitchen in the world, but nothing can derail plans for cooking like missing an ingredient. An organised kitchen saves time and money.

“Organise your pantry and refrigerator. It leads to a lot less waste and if your pantry is organised, you won’t double up,” says Siobhan Boyle, CEO of The Good Foundation.

Check the use-by dates on foods hiding in the pantry or fridge and group them according to use. Storing foods in labelled glass jars and placing them in a way that’s easy to see can reduce food waste.

Installing drawers rather than shelves can also stop food expiring in the hidden corners of a cupboard.

This may sound shocking to some home chefs, but consider moving away from gas to an induction cooktop. A sleek and streamlined kitchen is not only modern, but it’s also easy to clean.

Induction cooktops heat up much faster and their temperature controls are far more precise than gas, says Rice. Food can spill over and under the trivets and the knobs of a gas cooktop. With induction, any spills can be simply wiped away off a flat glass panel.

“We have something that’s unique to NEFF, called a TwistPadFire® induction cooktop dial. It’s a removable magnetic dial used to control the cooktop. Where surface grease and oil can make touch controls frustratingly unresponsive, the TwistPadFire® control makes it easy,” says Rice.

“It’s really simple to clean because you take the dial off, wipe over the cooktop and you’re done.”

An inside edible garden

Clear up bench space clutter and replace it with greenery.

“Have some windowsill garden herbs growing. You have that freshness there and it makes the kitchen very practical. It also smells delicious and saves you a fortune on herbs,” says Boyle.

Thyme and rosemary are easy to grow in a kitchen and are used in sauces and slow cooking. Basil, mint and parsley add a nice touch to a salad.

Get creative with the hardware

Simply swapping handles can be a cheap, effective way to modernise a kitchen. The taps and spout can be changed or you could enlist an electrician to change the lighting or switches.

“Matt black is quite on-trend. The same with gold, or brushed antique brassy tones have been quite popular. So, if people look to swap out the daggy, whether it’s really old chrome or white ceramic, hardware can make a big difference,” says Wilson.