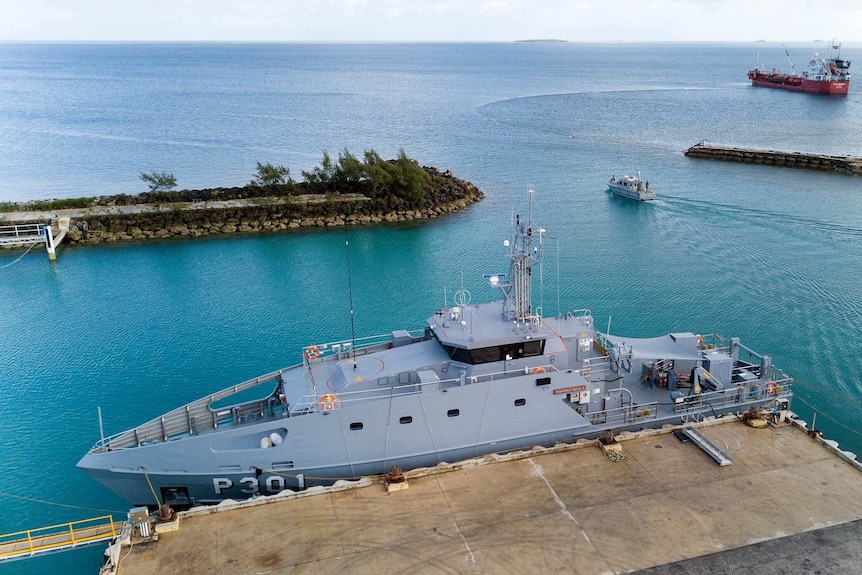 aunceston's Australian Maritime College has lost a multi-million dollar defence contract for a patrol boat training program it has run for almost 30 years — despite Tasmania's Minister for Defence Industries last year boasting the northern rivals could not match "28 years of action, experience, and expertise in Tasmania".

In a statement, the acting Defence Minister Marise Payne said the $36 million-dollar contract had now been awarded to TAFE Queensland.

The five-year contract will generate 24 new jobs in the Cairns region.

Ms Payne said the Queensland program's modern and innovative training approach would have significant strategic benefits in the Pacific.

"This, coupled with their established infrastructure in Australia and experience in delivering services in the Pacific, will enable TAFE Queensland to help achieve the outcomes of the Pacific Step-Up Program and the Pacific Maritime Security Program.

"This contract builds upon the success of the previous Pacific Patrol Boat training services contract, by providing new contemporary training for the Guardian-class Patrol Boat crew."

In June last year, Tasmania's Minister for Advanced Manufacturing and Defence Industries, Jeremy Rockliff, said the training school "rightfully belongs in Tasmania and that is where it should stay".

"Frankly, Queensland has missed the boat and cannot match 28 years of action, experience, and expertise in Tasmania, coupled with our natural marine advantages," he said at the time.

"This is just the beginning of a number of plans that we have here in Cairns," she said.

"Cairns is very important to us as a Navy home port, but also as a specific area in the Pacific that we really need to make sure that we have for our maritime capability."

Queensland began a campaign to win the contract two years ago, and the Member for Cairns, Michael Healy, announced $10,000 for TAFE Queensland to bid for the contract.

The AMC tendered for the program but was unsuccessful.

In a statement, AMC principal Michael van Balen said it was disappointing to lose the bid, but he understood why the decision was made.

"Hosting the training in the north of the country, closer to the Pacific Islands, and where the boats will be maintained, makes sense," he said.

"We wish the new training providers well and would look forward to investigating opportunities to collaborate in the future."

Labor Member for Bass Michelle O'Byrne said she was meeting with the AMC on Wednesday to discuss potential job losses at the AMC.

Ms O'Byrne said there were about a dozen employees involved with the training element of the program.

"My thoughts are with the staff who have been engaged in this project, some of them for almost the 28 years that it's been running," she said.

The AMC's statement said it would use the time strategically to redeploy some stretched assets into other areas of commercial growth.

"We are experiencing rapid growth in other areas including seafarer revalidation training, commercial simulations and vessel chartering," he said.

"Increasingly, we are specialising in fields including autonomous vehicles and their application in hostile environments, such as the Antarctic, along with defence."

The AMC will consider re-bidding for the Patrol Boat training in the future.

Tasmanian Senator Jacqui Lambie said the impact was "frightening" and the State Government needed to fund equipment upgrades at the AMC to make it more competitive.

"We know it's been really struggling over the years so I think most of us could see this was going to happen," she said.

"Unfortunately there are now private businesses and enterprises out there, and other states, that are coming over the top of us because we haven't kept up."